In Tamil Nadu, It Isn’t Just the BJP Which Struggles With the Core Values of Tamil Identity

In the poll-bound state of Tamil Nadu, none of the political fronts have tried to seriously address the core values of the Tamil identity, as political expediency has been on the upswing.

The forging of a Tamil identity has involved a long historical process. An understanding of this is crucial to win the hearts and minds of the Tamil people. While the Dravidian parties claim that they know the pulse of people and the Bharatiya Janata Party (BJP) desperately searches for the nerve, the Tamil people are in search of an alternative that can infuse fresh spirit into the political and electoral process.

As the electoral pace quickens in Tamil Nadu, one can see alliances tightening their last nuts and bolts and manifestos unfolding with familiar promises and free handouts from contesting parties.

The BJP has been trying to take advantage of the wedge in the AIADMK to strengthen its foothold – or its toehold at present – in the Tamil region. Like a hungry hyena, it hopes that internal factions within AIADMK and the outside threat of Sasikala and her nephew T.T.V. Dhinakaran would give it a chance to bite into the flesh of a substantial part of the Tamil vote.

But it has more or less realised now that further weakening of the AIADMK can deprive it of even the nominal presence that it had in the previous elections. In the 2014 elections, BJP could win just one of nine seats it contested and gather 5.48% of total votes. This declined to nil out of five seats contested and a vote share of 3.66% in the next round in 2019.

Given that all the fronts have been offering a slew of promises coated with sweet words, it is the articulation of the Tamil identity that may determine who the winner would be in the April 6 assembly elections.

In spite of the fact that Tamil language, literature, culture and art have existed for millennia, and the struggle for justice and equality has been around for at least as long, a perception has been promoted that the Tamil identity was given shape by the Justice Party and its offspring, the Dravidar Kazhagam (DK) of Periyar and the Dravida Munnetra Kazhagam (DMK) of Annadurai. Hoping to build on the symbolic trappings of identity, the BJP now thinks it can make inroads. 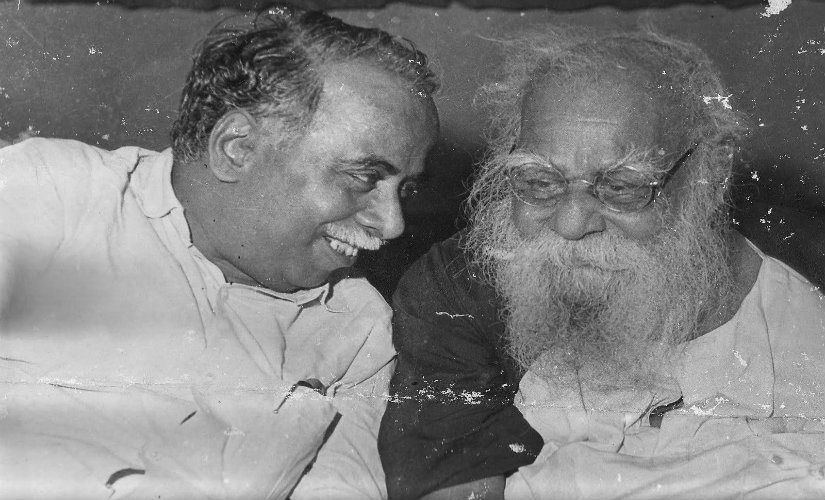 What it does not realise is that the historical process by which the Tamil identity has been forged is the reason why Tamil Nadu has repeatedly spurned the Brahmanical politics of the BJP and will continue to do so.

The struggle to preserve Tamil identity and block Vedic orthodoxy and Sanskritisation of temple worship and literature has at least a 2000-year old history. While the Mauryan Empire engulfed most parts of the Indian subcontinent, Tamil land stayed out of its grasp. The considerable inroads made by Vedic gods and festivals is evident as early as the epic Silappadhikaram, placed among the early Sangam literature in the South, which mentions Indra as an important god who commanded festivals in his name.

In the first few centuries of the first millennium, Sanskrit literature and Vedic rituals and sacrifices threatened to push Tamil to the sidelines. Vishnu and Siva, the north Indian gods, who replaced the Vedic gods around the Gupta period, were established as the premier gods in the Tamil country at this time, and religious canons were woven around them. The pantheon of local gods of the Tamil country was co-opted into this pan-Indian system, their figures finding a place external to the main sanctum and around the walls of temples.

But efforts of the Bhakti saints and members of the ‘heretical’ or the naastik sects – the Buddhist and Jain philosophers and writers – stemmed this avalanche from the north. It was about 1,000 years ago, at the time of the great Chola emperor Rajaraja that the Tamil language and customs were restored to their prime position.

Agama traditions of temple construction and puja were favoured over Vedic rituals and sacrifices. Tamil bhakti hymns were elevated to the position of the Vedas of the South, so much so that the reciters of the Tamil hymns led temple processions with the Vedic reciters relegated behind.

It is this exalted tradition that the Justice Party tried to take advantage of to become a popular force in Tamil politics in the 1930s. But unlike the earlier struggle against Sanskritisation and imposition of Vedic orthodoxy, which united the Tamils, the Justice Party reduced the struggle to one between Brahmins versus non-Brahmins – a supposedly racial divide. 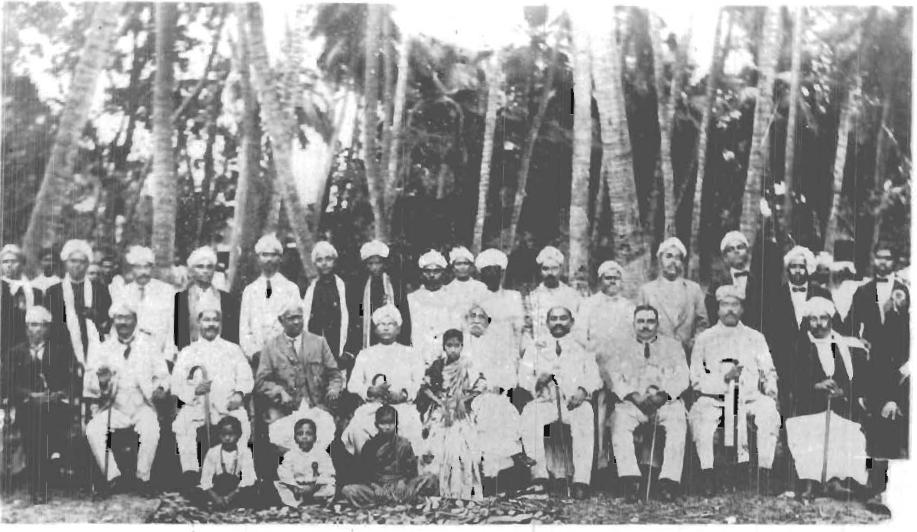 A group photograph of Justice Party leaders of the Madras Presidency taken in 1920s. Sir P. Thyagagoraya Chetty is seated at the centre (with a girl sitting beside him). Also present in the photograph are Raja of Panagal, Raja of Venkatagiri and Arcot Ramaswamy Mudaliar. Photo: Public domain/Wikipedia

While they succeeded in winning a few provincial elections, they could not sustain the movement. They took bold stands against the Brahmin domination of the Congress Party and the Madras Provincial administration, but they lost the trust of the people because of their elitist leadership and their opposition to land ownership of the tiller. Their antipathy to the Congress party led them to believe that the withdrawal of the British would result in a Brahmin-dominated polity and this prompted them to keep away from the movement against the Simon Commission and many other anti-colonial protests.

Periyar, who had quit Congress, disillusioned by its leaders’ faith in the Varna system and the superiority of Brahmanical traditions, led the self-respect movement. In 1944, he changed the name of the Justice Party to Dravidar Kazhagam, with its programme of eliminating the caste system, including untouchability, and the larger goal of a Dravidar Nadu (Dravidian Nation).

The formation of the DMK, the emergence of the breakaway AIADMK and the unbroken rule of the Dravidian parties since 1967 is a well-documented portion of the history of the Tamil nation and needs no elaboration here.

The expediency of political fronts

It is the lack of understanding of Tamil pride in identity and its historical process that now pushes BJP leaders into the delusion that wearing a white veshti and draping a thundu over their shoulder is all that is needed to win the Tamil heart.

To increase its vote share, the BJP has appointed a state president who belongs to the Arunthathiyar caste, a relatively more deprived caste among the Scheduled Castes. The party also took efforts to rename seven Pallar castes to the Devenndra Kula Vellalar caste, a long-standing demand of these Dalit groups.

But the DMK is not the only one struggling to fathom the Tamilian heart. The politics of ‘social justice’, where social groups have a near proportional representation in the power ladder, has been exploited to the full and is not likely to alleviate concerns regarding increasing unemployment and the widening gulf between the rich and the poor. It would be hard for the Dravidian parties to refute the fact that they have now become the haven for the elites of the ‘depressed classes’ who earlier fought for their own space in a polity dominated by Brahmanical thought.

The impact of the secularisation process of the early centuries of the first millennium, which etched the strong secular nature of the Tamil identity, the love for its language, tradition and nation, has waned in recent decades. The AIADMK which has become vulnerable to factional fights and dependent on the BJP for its survival can be hardly trusted to preserve and strengthen this Tamil identity. The three percent share that the DMK has given to Muslims within the OBC reservations may not go very far in stemming the communal divide that has gripped most parts of the country.

The DMK has promised 75% job reservation for locals and financial assistance of Rs 25,000 to 1 lakh for people going on pilgrimage to major Hindu temples, among others. It has announced that it will allocate Rs 1,000 crore for the renovation and consecration of Hindu temples and that Rs 200 crore will be provided for the same to churches and mosques. This precisely smacks of the fake secularism of the Indian state. Its 75% job reservation for locals is bound to attract restrictions against Tamils in other states.

None of the fronts in the current elections have tried to seriously address the core values of the Tamil identity – the secularisation of the state, opposition to Vedic orthodoxy and imposition of the alien caste system and self-respect, which needless to say, means respecting the same values in others.

Is it time for Tamil people to look beyond the prevailing political fronts and attempt the modernisation of the concept of Tamil identity which is in tune with the expectations of the people?

Trusteeship: An assessment on the 30th anniversary of the MMS budget

Only the Afghan people have a right to determine their future!

Does India Even Need a Parliament?